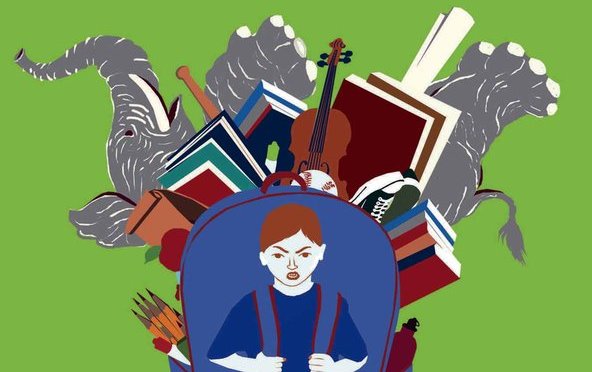 You know you’ve got a problem when you are in pain from your backpack as you are going back up to your room to grab those two extra binders you’ve forgotten. And yet, this happens quite frequently to the average GFS middle school student, particularly in the 7th and 8th grades. One’s backpack becomes more than a pain in the neck, it becomes a serious pain in the back; And not only can it hurt to walk around with a backpack, it can, depending on just how much is in the bag, actually cause long-term problems in a student’s back. While there are understandably many tools of the student, the “toolbox” of the student should not harm them even when they are not wearing a backpack, let alone while they are.

Of course, it is not as if teachers are oblivious to this. Some may assign rather heavy loads, but most, if not all teachers are aware that backpack weights are a problem. They have even gone so far as to create a solution,lockers. Except, if lockers are so widespread (after all, we literally see them in every hallway of the Sharpless Building), why is it that backpack weights are still an issue for schools that have them?

The primary answer is that, as it happens, many students do not even use their lockers. In reality, to actively use one’s locker can take a fair amount of time, relative to the time limit placed upon getting from class to class. There are the locker combinations to remember, and when they escape a student’s memory, the student has to track down the piece of paper on which their locker combination was originally given to them, if this even still exists. And even with the locker open, the compartment given is smaller than the space the average backpack offers, and is a pain to deal with when a student has such a heavy payload of binders and papers to work with. Here, a student could spend a maximum of five minutes (or even more) just getting their locker open, and dealing with loading and unloading, a range that already exceeds the grace period.

Lockers, as one might see, are not exactly the end-all solution to lowering one’s backpack weight. While some use them better than others, it is a hassle any way you go about it, especially if your locker is inconveniently placed in the building. However, they might do a bit of a better job if not for another factor, the actual kinds of homework that students receive.

When the average middle school student looks inside their binder for any of their four-to-six main classes, they will generally find it filled with worksheets, notes, loose-leaf paper, quizzes and tests, and other miscellaneous handouts acquired through the year. With all this crammed into a single binder, four to six classes at a time adds up to a lot of weight; this doesn’t even include the other textbooks and workbooks most students carry in their bags. There are some things that have been created to lessen this such as periodic binder clearings, but even these don’t do all that much, considering how quickly they fill up.

A much better idea is to replace some of these worksheets and textbooks with online files. In some subjects such as Math, a student can acquire one or more worksheets or handouts per day. Imagine how much less paper would be used, and how much lighter backpacks would become, if all these were suddenly on one’s computer. The digital world actually has a lot to offer in this regard, and to transfer some of a backpack’s weight to virtual documents would be beneficial to both teachers and students; the students carry less, and less papers get crumpled in bags or simply lost in transit.

This is not to say that the student body should simply ignore the options it has. For starters, lockers, despite their imperfections, can be used on trips where the locker is on one’s way to the next class, and the common strategy of only taking the books one needs to get through the next break could certainly be used more than it is now. Plus, some backpacks have waist belts and shoulder straps that can effectively lessen the strain of a backpack, and students don’t even use them.

Clearly, backpacks and binders should not be replaced, because they both serve us as students daily in at least a dozen ways, but they should not be so full that it is painful to walk around with them. Through a combination of the strategies above and, hopefully, new implements to this field, we as students can lessen what we carry, and how much of a toll it actually takes on us.