When I think about the films I’ve watched, all the blockbusters, all the tacky rom-coms, all the lowbrow comedies, all the overacted melodramas, I realize that when it comes to finding masterpieces, it can be difficult. Obviously there are the classics –Citizen Kane, Vertigo, The Rules of the Game – but what else? How many films aren’t just expertly crafted, but also stunningly original? Even thoroughly entertaining fare such as Argo and The Artist stick strictly to Hollywood formula. Then there are films like The Tree of Life, which are so utterly overrated it seems as though film critics are desperately trying to force a new classic onto us. Ultimately, although there are plenty of decent – or even very good – films being made these days, rarely do we see a great one.

Yet, once in a blue moon, they come along – those movies that are so great you just watch them over and over again until you know every line of dialogue, every theme, every gesture. Every movie lover, including myself, lives for these films. They are why we devote so much time to being inside a dark, stuffy room with a bunch of strangers, shoes stuck to the floor by old gooey candy, staring at a huge screen. Some might call it an addiction, and maybe they’re right. We prefer to call it love.

The purpose of this column is to try and show people that television isn’t the only medium producing great work. There are some pretty great films being made too. They’re not common, and occasionally a bit obscure, but they’re out there. You just have to go and find them. Every issue, I’ll tell you about a different great film, made no earlier than 2000. This is meant as a mere guide, a starting point. There are many other modern great films, most of which I probably haven’t seen. But this is just a rough outline of some of the ones that I found most memorable. I hope you do as well.

Great Movie #1: There Will Be Blood 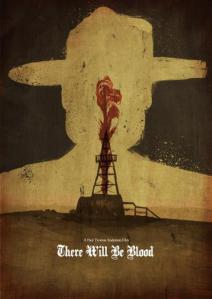 There Will Be Blood is relentless, one of the most exhausting films I’ve ever seen. It has no need for uplift or grief, merely two and a half straight hours of ever-increasing brutality.  There are no heroes, merely fighters in a rectangular rink, all trying desperately to be the victor. The few saintly individuals that occupy the film’s barren landscape are trodden upon by the powerful, corrupted men. It’s a film that goes beyond fictionalization, beyond realism, into a state pure purgatory.

At the same time, its also exhilarating filmmaking, one elaborate descent into hell spouting creativity and beauty while sidestepping any semblance of cliche. It’s a wholeheartedly original work, and one of the most singular (and best) films of the past decade. There is simply nothing like it.

The story is plain enough on paper; The film unfolds in three parts. The first portion Daniel Plainview’s (played by Daniel-Day Lewis) beginnings as an oil man in a spellbiding, nearly wordless 15-minute prologue. The majority of the film follows Daniel’s attempts to drill in a small town called Little Boston, California. He faces a problem when Eli Sunday (played by Paul Dano), the local pastor, challenges Daniel’s actions by preaching to his church. The scenes unfold naturally, the movement of the camera coinciding with the emotional state of the characters. Then, in the last half an hour, the film skips ahead about fifteen years, and spirals into an inspired madness. By that point in the film, everyone has been broken, and those who could escape have long gone. All that is left is for those still standing to finally fall, either in defeat or exhaustion, to collapse on the ground. When Daniel utters the words “I’m finished,” just before the screen goes to black, the entire film seems to decompress, The screen exploding due to the force of such brilliance. The semi-insanity of the ending would never have worked, though, if the previous two hours hadn’t been so careful and precise about revealing the characters to us. The performances by Daniel Day-Lewis and Paul Dano are both works of genius, while the dialogue sounds like satanic poetry. The imagery is truly spectacular, each frame looking like a painting. The film leaves you on the kind of cinematic high that can only be achieved through masterful filmmaking of the highest order.

Many have called the film Anti-Christian, but I wholeheartedly disagree. The film’s grasp is to encompassing to single out a specific religion. The film is anti-Faith, anti-Love, anti-Trust, anti-Compromise. It doesn’t meet you half way or sugarcoat anything. You bear the brunt of these events, and you do so with or without your consent. Some people may be too dependent on any of the ideals listed above to be open to cynicism towards them, and would rather dismiss the film as blasphemous. However, by doing so, they’re missing out on the greatest explorations of evil in recent memory.

Paul Thomas Anderson’s film have a certain quality about them that turns many people off. His work, including Boogie Nights, Punch-Drunk Love and his most recent work, The Master, always keep the viewer on the outside looking in. Anderson makes one conscious of the fact that they are staring at a screen, and that what is going on inside isn’t reality. Yet, like the best filmmakers, he utilizes the screen as a way of reflecting the world back into the audience’s faces. Whether it be Punch-Drunk Love’s swirly obsession with love or The Master’s compulsive desperation and loneliness, his films always show us the world in ways we’ve never seen before, largely because they have little intention of connection with us. This is part of the reason Daniel Plainview is such a strong character. He’s not an antihero, because that would mean that there was something even remotely likable about him to begin with. He is a full-fledged villain, one who becomes more fully-realized every second he’s on screen. We never like him nor do we ever care for him. The same goes for every other character in this movie. Yet, for some reason – maybe its deeply-rooted evil within ourselves, or maybe its just utter fascination- we stayed glued to our seats, eyes staring at the screen in front of us, widening with each frame. It’s the kind of genius that makes There Will Be Blood the greatest film of the past ten years.