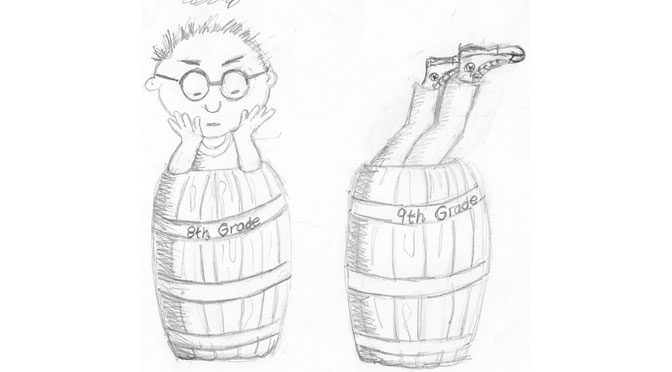 Middle school is over for me and the other sixty-six humans with whom I have now spent much too much time over the past three years. So first, a congratulation: we actually made it! We managed to live through the first of the awkward years, the painful and humiliating years. The years that at family gatherings our relatives cringe to hear we are currently encountering. The stressful, socially inept and hormonally imbalanced years have descended upon us, and we have made it through eighth grade.

Taking a poll of the class of 2019’s opinion on middle school yields a wide range of one-word answers, some of which cannot be printed in most relatively professional publications. The answers below are to the question, “What is the first word that comes to mind when looking back on middle school?” Barring those that I have personally censored for my own dignity, some of these answers are included below, divided by general adjectival categories.

Negative: A great number of responses taken were negative, but allowance must be given for the mental state of the respondents who were just shaking off the haze of anxiety that is Final Exam Week. Listed below are some responses.

Half-hearted: These respondents were simply unemotional about middle school, or possibly just unenthusiastic about having their lunchtimes interrupted by a Corner newspaper editor.

Boring
Over
Done
Meh
No
School
Why?

Positive: Yes! Some people actually enjoyed this!? What kind of people are they!?

Fun
Splendid
YOLO (this is debatably neither positive nor an adjective)

Realistic: Many of those quoted took a more simple angle on the question asked. Middle school was widely characterized as difficult, both academically and in other ways.

In truth, middle school is just hard. Although it has been both bashed and romanticized in popular culture, it is difficult to pass judgment on a stage of our lives that we are still in. It has been hard and stressful, perhaps unnecessarily so. So in its own way, middle school—and especially grade eight—has taken its toll on us. Despite this, it is evident that we have had more information stuffed into our battered minds than we could have possibly imagined would fit. Some of it was simply drudgery and busy work, but sometimes (and more than once) there have been times of “fun, splendid and YOLO,” to quote the poll respondents.

In short, although maybe now it doesn’t look like it, we had some good times in middle school. We gained maturity (in limited quantities), height (in unequal distribution), and on occasion, we actually learned. Teachers: thanks for putting up with us; most of us sometimes enjoyed your classes. Thanks for dealing with our apathy and teenage craziness; we’ll miss you despite what you’ve done to us.

So yes, we have done it. Onward march now to the seemingly distant land of high school, where immensely tall and God-like teenagers will cast their shadows over us. In a parallel of our rise from the top of lower school to the pits of middle school in sixth grade, we will once again fall from the top of the barrel to the bottom—that is, from the ruling class of the Sharpless building to the bottom of Upper School hierarchy. We have come, seen and conquered middle school.

So back to the “bottom of the barrel” for us; I’ll see you there.