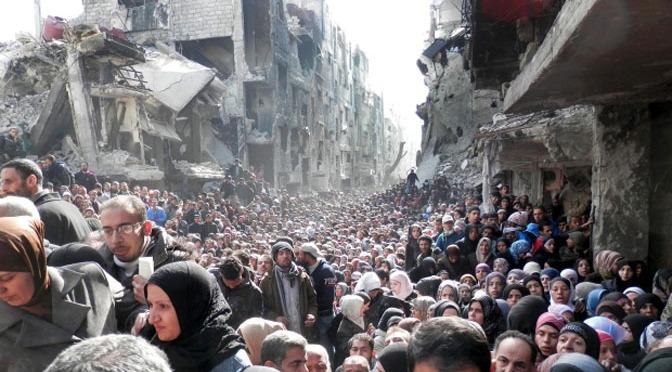 Some people love them, some hate them. The topic of Syrian refugees has been controversial for the last couple of years. Ever since the Syrian War of 2011, residents have been fleeing Syria, attempting to escape the civil war taking place. The situation with the Syrian refugees is known to be the largest humanitarian crisis in over a decade.

In 2016,  4.8 million refugees were living outside of Syria, which is over ⅛ of Syria’s population of 22.85 million. People are fleeing because of the violent government crackdown that took place in 2011. Since then, more than 250,000 people have been killed. The Civil War has also worsened because of attacks from separate parties. To escape this violent environment there is only one option: traveling to another country. Every year, countless Syrians risk their lives and attempt to travel to Europe and America in search of a better life. They must flee at night in order to minimize the chance of being shot by snipers or kidnapped by other parties.

This topic first gained prominence in late 2011, after the Syrian Civil War began. The global response was strong and immediate. As of 2016, 17 billion dollars has been donated to help the refugees, but there is still a long way to go. Millions of refugees are living in poverty with no food available to them.

There has been an international debate about the policies countries should have in regards to accepting Syrian refugees, and whether they should be allowed. Some are against the refugees, as they claim they will lead to the downfall of the economy, their everyday lives, and a drop in tourism. Others think that taking in the refugees is the right thing to do.

There is also an ongoing debate as to how many refugees the United States can or should accept. Some governors in the US do not want to accept refugees, causing many states not to accept them. People’s perspectives on this topic has also changed significantly since the Paris attacks. This is because there is a possibility that jihadis (a group connected to ISIS), could enter the US with the refugees. This has lead to many people saying that accepting refugees can be a threat to security.

While Turkey has over 2.8 million refugees residing in their country, the US has less than 15,000. The Obama administration was chastised  by a federal judge because of the lack of Syrian refugees that the US accepts. Some think that by not accepting more refugees, the US is doing them and countries like Turkey a huge disservice. Turkey could be facing a refugee crisis, and is in turmoil because of the issues taking place in Syria. The US has the financial means to accept millions more refugees compared to countries like Turkey.

There are people who say that accepting the refugees will grow the economy for the US because the refugees would be adding to things such as the labor market. Others believe that the US should not accept any refugees as it could change the lifestyle of some citizens, they want the US to use it’s money to help the poor Americans, or they simply just do not want refugees residing in this country.

Another country which has been under tremendous scrutiny regarding its policy towards accepting refugees is Japan, who only houses six refugees nationwide. When the Syrian refugee crisis began gaining attention, the Japanese government did not want outsiders in their country. They then decided to donate 181 million dollars to the cause, which is the second most given by a country (the US gave the most). The prime minister of Japan has said that the country needs to take care of its own people, which has led to Japan being at odds with the UN refugee agency.

There has also been controversy surrounding the living conditions of the refugees and their journeys to other countries. There have been claims that the Turkish border guards have beaten some refugees to death. Though these were denied, there have been many similar claims of abuse, hostility, and discrimination towards the refugees in countries all around the world including the US. Recently, there was a 27 year old refugee who was found dead with her two children in their freezer in Denmark. The police know that it was a murder but they do not know who committed the crime.

It is a well known fact that the living conditions of most refugees are poor, and some are  forced to live in ghettos or even on the street. The refugees are struggling financially, and the number of refugees is only getting bigger. Despite popular beliefs, only 10% of refugees live in camps. While some perceive the refugees with these living conditions to be dangerous and claim that this is the reason that the US shouldn’t take refugees in the first place, others think that the squalor in which they are living is unacceptable and measures should be taken to change this.

This topic has been disputed for the past couple of years, and there have been many different opinions about how to approach it.