Emily Bazelon, an alum of Germantown Friends School class of 1989, graduated from Yale in 1993 and is now the senior editor for online newspaper Slate. She has written on many controversial issues such as abortion, bullying and family issues. Recently she published a book on bullying called Sticks and Stones, a look inside grade school bullying. END_OF_DOCUMENT_TOKEN_TO_BE_REPLACED

Animation is the displaying of different frames rapidly in sequence to give the illusion of movement. Animation is all around you, yet many people don’t realize all of the hard work that goes into animating an object.

So, if you don’t live on Mars, you may have heard certain members of the female society saying certain things about each other. “Oh my God! Can you believe she’s wearing that?” “Dear Lord what was she thinking? That’s a belt, not a skirt!” Admit it, you’ve all heard it (a lot). The thing is, the girls who are judged and complain are often the girls who judge as well. And the girls who judge and whisper behind their hands would be devastated if any of these words were turned against them. Why? They’re just words after all. But those words carry a judgment, and with that an identity. END_OF_DOCUMENT_TOKEN_TO_BE_REPLACED

The Scottish exchange had always been a fanciful idea for me. Something I watched other girls experience and daydreamed about myself. This year I hoped to be a part of it. There were eleven girls applying and the application process is pretty competitive. Finally, the day of truth came and I was ecstatic when I found out I was going.

As soon as the selections were made the Scottish exchange stopped being a fantasy and became a reality. Most of that was due to the paperwork. Nothing says real-life like a stack of forms. As the day of departure approached the butterflies in my stomach multiplied. I was excited, but also jittery with nerves. And then there was the plane ride. There’s nothing like flying thousands of feet above billions of gallons of freezing salt water to calm the nerves. But we survived and arrived, a bit tired, but in one piece.

Life in Scotland started! Wake up. Get dressed. Brave the freezing outdoors. It became routine incredibly quickly. Now my life in the United States seems alien. American accents are a novelty. Although now it seems familiar, Scotland still surprises me. I fall asleep as fast as I can so I can wake up every morning wondering: “What will I learn today?”

One of the really interesting differences between America and Scotland is the difference in pop culture. The things that are popular here right now were popular in America several months ago. This is reflected in the clothing, the music and the way people talk.

Another difference is the architecture and layout of the cities and towns. This may sound boring, but I have found that there is a very different feeling that you get when walking down Princes Street as opposed to walking down Pine Street or Germantown Avenue. The buildings here are made of bigger stones, with a grander and more Victorian feel. The buildings in Philadelphia seem more cobbled together and possess a distinctly haphazard charm. In Scotland, the streets are wider and, more often than not, are adorned with a couple of double-decker buses. In Philadelphia streets are narrow and usually full of bumper-to-bumper Toyotas and minivans.

A perspective from Orlagh, a student from St. George’s School:

When I used to think of Philadelphia I automatically thought of the cheese; I mean who doesn’t? It was our introduction day to upper school when I first found out about the North American exchange and for 3 months my family and I called it “The Canadian Exchange.” Little did I know that I was not going to be going to Canada, but Philadelphia!

It was a few days before Lucy arrived and I started to realise that I had somebody I didn’t know, arriving from America in 3 days, living in my house. It’s a scary thought, but I generally think I was too excited to see anything odd about the situation! On the morning Lucy arrived I was bubbling…I spilt my hot chocolate everywhere trying to run to the library, where we were meeting them, 15 minutes before I was due to! Unfortunately the plane was delayed a little so we got to miss some of period one. It was so weird putting faces to names (and distorted Skype faces to names…) but within the first hour Lucy and I were laughing over jokes and getting in trouble for being too loud! Lucy and I have done many things since she came, including going up to St. Andrews and going into Edinburgh. We have found common ground and have found out about all the differences between St. Georges and GFS! I am so glad that I have been chosen to take part in this exchange and look forward to going to GFS on the return journey.

As the temperature drops to the low forties, you may find yourself staring into your drawer or closet wondering “what will I wear today” or “how do I keep warm without buying woolen pants?” The first thing to recognize  winter fashion is that while personal style is important, not catching pneumonia takes precedence.

If you are of the feminine inclination, several pairs of non-distressed jeans are in order. Make sure they are the ones that have actual denim as opposed to ultra-thin jeggings (that are no doubt styling, but they will not keep you warm). Next, it is best to make sure you have sweaters and jackets that you will actually wear; maybe having about five in total, so you have one for every day of the school week. The new thing is over sized and baggy loose-knit sweaters that can be worn over leggings, or skinny jeans (usually paired with a pair of boots). Speaking of boots, the new over-the-knee boot has become incredibly popular in the last several months.

Pants are great, but if you want to mix it up with a couple skirts there are several things to keep in mind. Firstly, recycling summer skirts with a winter sweater is totally cool and adds a bright splash of color to your wardrobe. To make sure you do not catch the aforementioned pneumonia you should probably pair this skirt with some leggings or tights. During the winter, sweater-tights are a really valuable part of a wardrobe. Though not everybody likes them you can get them in all different knits, colors and designs. If you want to go a bit more formal with you tights you can go for a sheer tight with a design on the back, which spices up any outfit.

Since the fashion industry is really just a cycle, a flashback from the eighties, leg warmers, have reentered the scene. There are a million different kinds to choose from, but the most traditional are the thick-knit and slouchy, as well as, the thick but tight leg warmers to be worn under boots.

If you are of the masculine inclination, several pairs of good jeans are in order as well. Also, layers are critical – do not go to a cold place with a down coat layered over a cotton t shirt; that is a recipe for a cold. A good jacket is in order and (possibly) a sweater, though I hesitate to say that because good men’s sweaters can be hard to find. Also, no matter what gender you are a good pair of corduroy pants are always warm and fashion-forward during the winter. Leather jackets have dominated the runway for both males and females this season. But the design for men’s jackets has become more tailored over the years and less like the slouchy bad-boy version we are all used to. Finally, winter shoes should be whatever style you like just with enough support to walk on icy places and thick enough that your toes will not get frostbite (and fall off).

Hopefully this has been somewhat helpful and you will go into winter warm, cozy and fashionable. 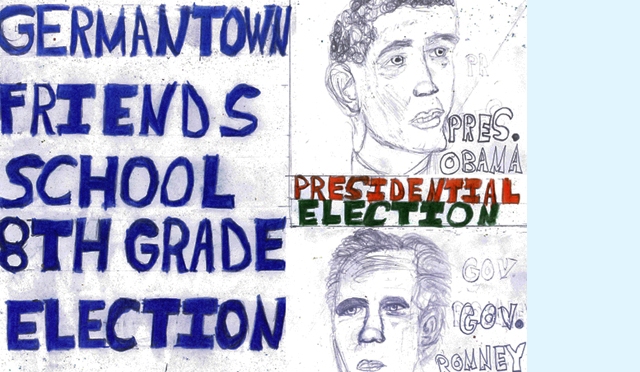 The  eighth grade elections unit is an assignment. It’s a huge assignment, a radically creative and difficult assignment, but an assignment nonetheless. What makes the assignment so different than any other is that it requires you to get people to engage, to care about what they are doing. A good grade depends on your ability to connect with students in other grades and have insight into school, city and statewide issues. For once your academic success has nothing to do with your intelligence, but rather with other’s perception of you and your social intuition.

Our  eighth grade election assignment was based around the same time as the national elections. Students were supposed to gain insight into how hard it is to get people to vote for them as well as pay more attention to current events. So while President Obama and Governor Romney were talking about outsourcing and taxes, eighth graders were trying to win votes by promises of longer lunches and less homework.

Besides the obvious difference in target audience, the eighth grade elections were if course on a much smaller scale.

Campaigning for funds, or “campaign dollars” was the first challenge presented to the eighth grade class. While it’s unclear if funding for the national elections work the same s way, getting middle school campaign dollars requires a lot of pleading, bribery and ice cream (or lollipops or baked goods).

Next, the “parties” had to get their issues out to their fellow middle schoolers. This was accomplished through posters, buttons, speeches, commercials and/or websites. All of this publicity was financed by the campaign dollars each party gained through bribery. And even if the posters and buttons gained some support, no one in the elected parties knew quite  how to go about making the changes their parties put forth in the first place.

There were around nine or ten parties, all of which had there own platforms and goals. For instance,  The Right Direction party believes in the arts, is pro-environment and believes in animal and women’s rights. The FRS party believes in grade equality and longer study halls.

National elections are similar in that all political platforms seem to promise so much, yet in reality, passing laws is hard – and everyone has to want to make it happen. The most effective laws seem to be made during wartime or during emergencies, when the country’s real needs brings everyone together.